Jotas, I Drew Juanga For The L.A. Times! 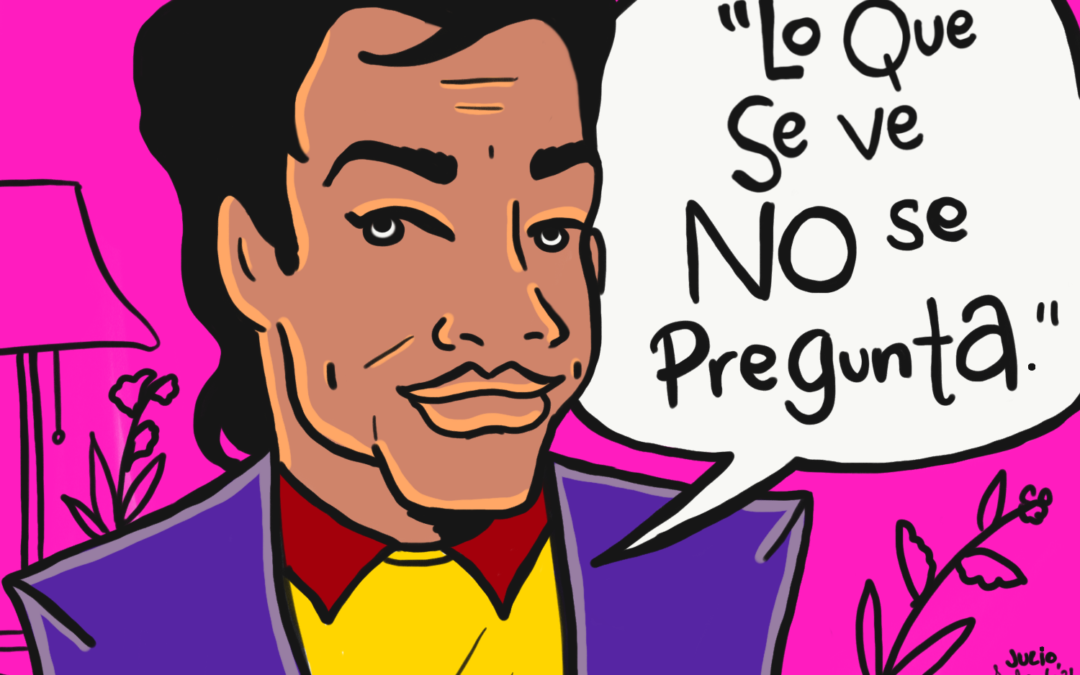 Juan Gabriel when asked if he was gay: “Lo que se ve no se pregunta”(Julio Salgado / For The Times)

Three illustrations of Juan Gabriel by yours truly appeared in yesterday’s PRINT issue of Los Angeles Times. The images accompany this beautiful and personal story by Fidel Martinez about the iconic queer crooner’s impact on the Latinx community. They also put together this awesome playlist with some of the singer’s top bangers. I’ve been getting a lot of congratulatory online comments and direct messages about how they’re in their Juanga feels about the story and illustrations and to be honest, SAME!

To be able to create art of such an iconic Mexican and queer figure for such an L.A. staple as the L.A. Times it’s truly something that I am so, so proud of. The journalism student in me is still giddy from excitement so don’t mind the grammatical errors as I wanted to write down my thoughts about what this means to me into the bloggy ASAP.

Although this is the second time that L.A. Times senior art director Martina Ibáñez-Baldor pings me for an L.A Times collab, there’s something super special about these images specifically. First of all, as I said in my reply to Fidel’s hilarious tweet about the Chandlers rolling in their grave, Martina got a hella gay Mexican immigrant illustrating for an L.A. Times story about someone who a lot of us jotas see as THE mother jota! Like, it took me a minute to come back from my gay feelings and doubts about whether I was the correct person for the gig. But I got over it and got to work.

Second of all, I knew I had to include my mother in one of the illustrations! Ironically, it was for the illustration that doesn’t have Juanga’s face but does include the lyrics to one of her favorite songs of his. As millennials who learned to love his music through our parents, one thing that we’re of course reminded of when we listen to this music is our madres, tias, and abuelitas loudly cleaning the house on the weekends blasting his music. A stereotype, based in patriarchal truth of course, is that Mexican mothers only tend to pass on los quehaceres del hogar duties to their daughters. Not my mama. Growing up, EVERYONE had to do their part in household chores. There was no way that she was gonna clean other people’s houses for a living and come back and have to do the same in her own home when me and my sister were both capable of doing so ourselves. 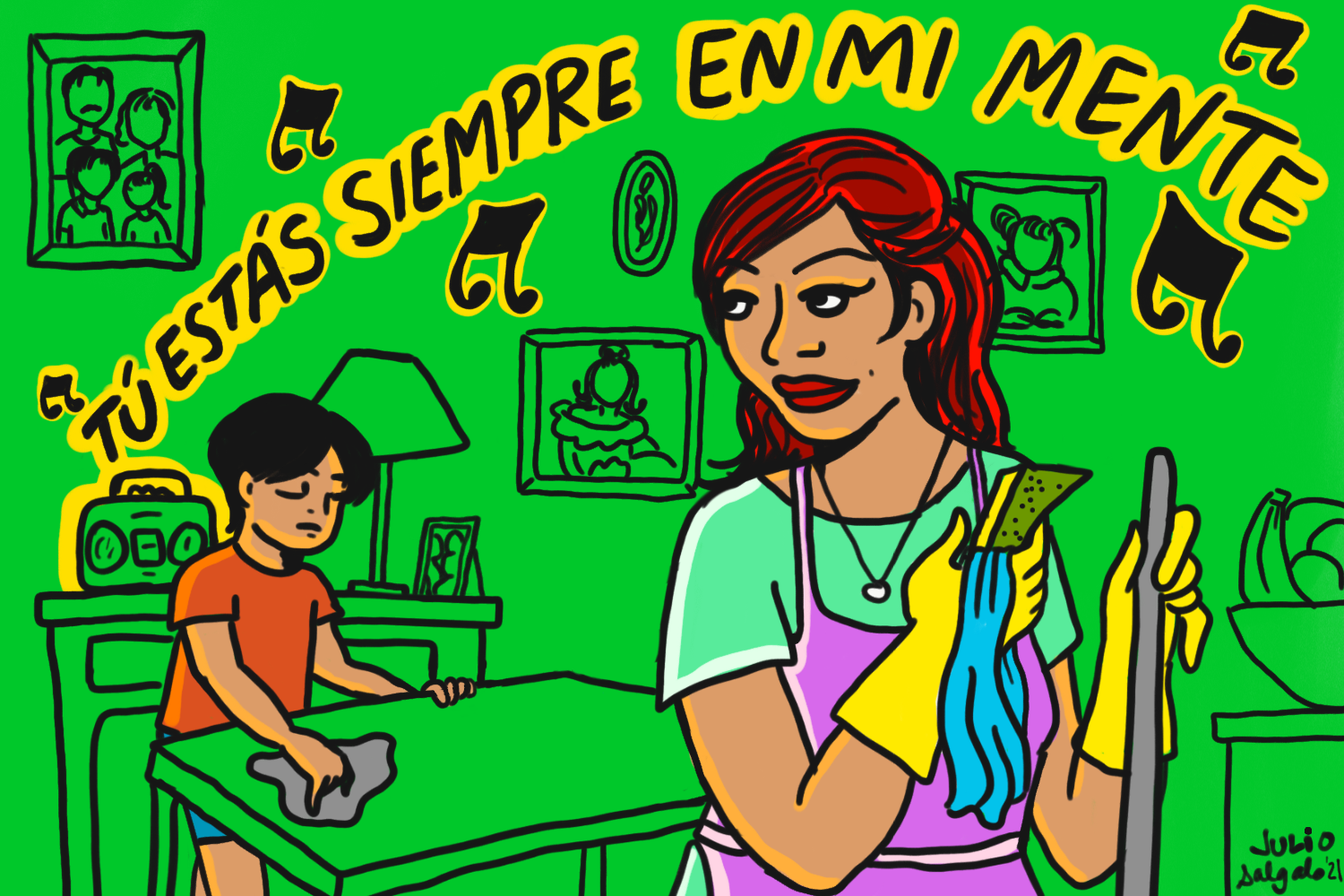 Artist Julio Salgado: “I wanted to illustrate a mom teaching her son to clean while listening to Juan Gabriel. I totally took this from my own experience as my mom had no tolerance for boys just sitting around and not cleaning when we were growing up.”(Julio Salgado / For The Times)

Lastly, of course, I think about my late tio Chicho. I have no idea what Juanga meant to him, but for a Mexican gay man who came of age during the rise of Juanga’s career, it had to mean something. Even if that something probably had some negative connotations. For baby Mexican jotas, being called Juanga was not something you embraced because it came from a hateful place. We’re in the age of acceptance now, so most of the jotas I know are proud to call Juanga one of our own. But for a man like my tio who had to migrate to the U.S. to live his full queer self, what did it mean to have someone so publicly queer? I don’t know jota. But this one is dedicated to you tio Chicho. I hope you and Juanga are partying in jota heaven. 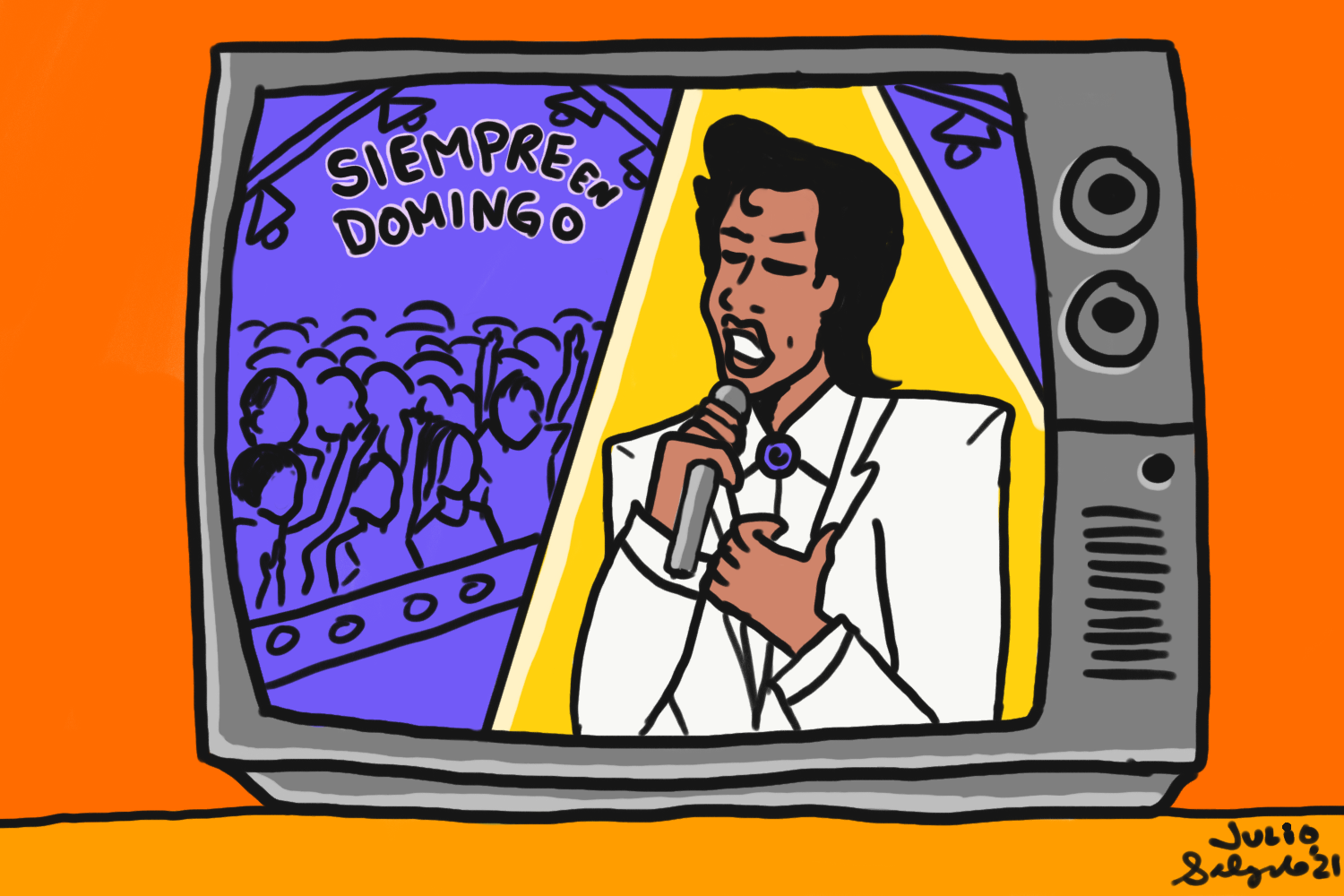 This journey has been interesting. At times strang

During a virtual panel this week, I was asked who

Getting outside of my comfort zone tonight with @g

I want to start this week by sending my gratitude

RSVP NOW for #BeyondStatus!!! We are beyond the un