My Name Is Julio: A Short Film By His Best Friend Jesús Iñiguez

Bigger Than Any Border

I Would Rather Be Undocumented 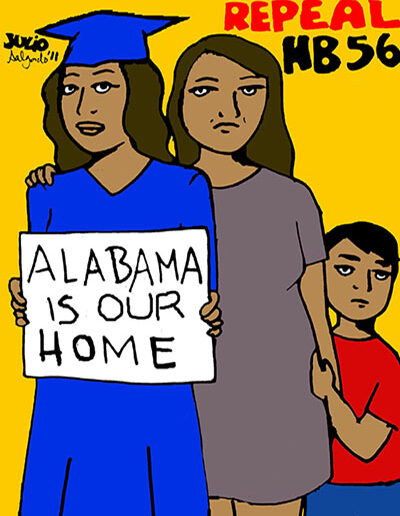 Undocumented and Unafraid in Georgia, 2011.

My Parents are Courageous and Responsible, 2011.

I actually reconnected with Jorge Gutierrez during the hunger strikes outside of Sen. Dianne Feinstein’s office in Los Angeles, CA. We’d actually met a couple of years prior when I was dating his then roommate. But that’s another story for another time. This was one of the first times that I began to truly express my queer identity in these images. What you have to understand about the migrant rights movement is that it was very religious. I remember an instance where I was part of a bus ride from California to DC with members of a catholic organization and there would be some homophobic comments thrown here or there. I remember Jorge was one of the first people to tell me to be more intentional in creating art that spoke to that part of myself.

As part of the continuing push to pass the DREAM Act through civil disobediences, a bunch of undocumented activists and their allies staged a hunger strike outside of Sen. Dianne Feinstein’s office in Los Angeles, CA. I decided to pay a visit to the folks doing the hunger strike and thank them by making some quick portraits of them. When I got back home, I created this image as a homage to all of the activists. Most of my initial images were black and white, but this is where I started using a little more color on these images dedicated to undocumented youth.

M.I.A.’s “Born Free” was such an influential song for me in 2010, a pivotal year in the migrant right’s movement. More specifically, it was the year that undocumented youth got tired of having others speak on their behalf. In May 2010, undocumented activists Lizbeth Mateo, Yahaira Carrillo, Mohammad Abdollahi, and Tania Unzueta, along with Raúl Alcaraz, sat at Sen. John McCain’s office in Tucson, AZ to put a face to the DREAM Act. This image was one of the first of many images that just came out of me, fueled in great part by the organizing of these undocumented activists and the loud guitars that M.I.A. sampled from Suicide’s “Ghost Rider.”