No Thank You, Soccer 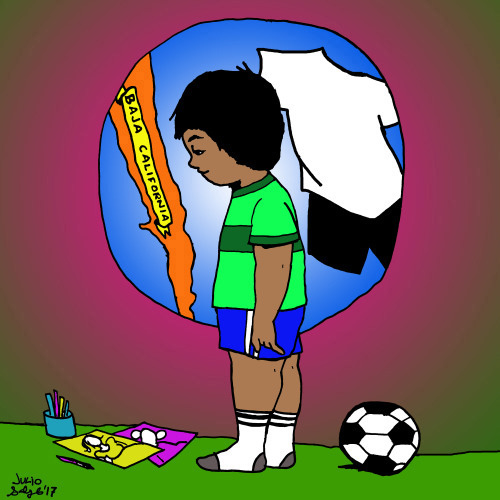 It was my mother’s idea that I joined a soccer team.

The small soccer field across the street from stonewalled church in the Mexican town of Ensenada was my biggest nightmare. Every other weekend, we’d show up with our stained white t-shirts and black shorts, a cheaper alternative than actual soccer uniforms.

“Mijo, te estas poniendo gordito,” she would mention as a way to bring up soccer. “Maybe you should give it a chance and join your uncle’s team.”

I hated practice in that soccer field.

I honestly didn’t really understand the whole excitement around soccer. It’s probably a gay boy cliche, but I leaned more towards pop culture fandom and being creative alone in the room I shared with my sister back in Ensenada than watching a bunch of grown men kicking around a soccer ball.

During games, I preferred seating out on the sides. Since my uncle was the head coach, I was encouraged to actually participate during our matches no matter how bad I was. It was humiliating. I always felt personally responsible for loosing every single match.

“But how would you know if you’re not good if you don’t put as much effort as the other boys,” she’d reply.

Oh my mama. God bless her heart. She didn’t understand boy culture and how far away I wanted to be from it. For Mexican boys, soccer is life. If you didn’t know about what teams were winning and loosing, you were called a joto, which I secretly knew I was. Trust me, I’d seen Aladdin, I knew.

But my mother was worried about my weight gain and she saw sports as a way for me to get on the right path. I began gaining weight around 8 years old and my mother was worried that my lack of physical activity was the cause of it. And it’s not that I wasn’t physical. I loved running around with my neighbors and getting dirt under my nails.

But back in the soccer field, I felt that people were judging the way I tackled my physical activity. Running around and making sure that I kicked the ball was a balance I couldn’t keep up with. It also didn’t help that I would close my eyes whenever someone would pass the ball to me in an effort to make me feel like I was part of the team.

Whenever I’d manage to stay away from the soccer action, I would think of ways to entertain myself. I would stare at the moms seating in the benches, wearing their Sunday best to these matches. It was the early 90s so bright colors in clothes and party make up were a must. I’d imagine how much fun it seemed to get up early in the morning and get dolled up with such bright colors. I would suddenly be shaken back to reality when the ball would come my way and I would awkwardly play around with it while a mob of boys from the opposite teams would run in my direction in order to steal the ball away from me. Shit was not fun!

Sure enough, I didn’t stay in the soccer team for a long time.

My mother stopped bugging me to go to practice. Thankfully a new public swimming pool opened up across the street from our house. When I showed interest in joining my cousin in weekend swimming classes, it made it easier for my mother to let go of any aspirations she might have had about having a soccer star in the family.

Today with the @conmijente and @familiatqlm homies

Love note during this crisis: My number ones from

To be fair, this foo never gave a fuck.

Cheese in times of crisis. 📷 by @wilfilmsss

Look over there! 📷 by @wilfilmsss