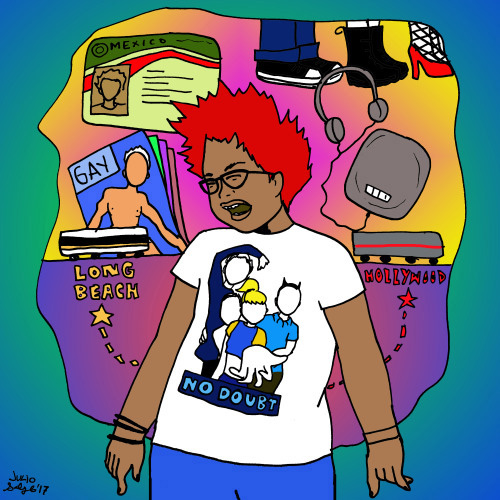 “You like Andy Warhol?”, Mr. Degreif, my 12th grade art teacher, asked me once pointing at my I Shot Andy Warhol promotional movie shirt. I had no idea who Andy Warhol was. My uncle Chicho had given me the shirt, which he found at the Hollywood Out Of The Closet store he used to work at. I was embarrassed. I felt like a poser.  So I nodded yes. After that awkward moment, I went out and rented the movie and was fascinated by his life style. I became obsessed with the idea of moving to New York City and becoming the Mexican Andy Warhol.

Once I found out a little bit more about Mr. Warhol, I felt the need to “act” like an artist. I needed to walk strange streets and explore different environments; to leave North Long Beach and take the metro to Hollywood, I believed was the closest thing it felt to be walking the streets of New York City.

Around this time I’d began expressing my artistic leanings by dressing…different. This meant dying my spiky hair, writing on my pants and wearing No Doubt t-shirts and fake black rim glasses with no actual glass.

I’d hop on the blue line and make that sacred trip to Hollywood with sketch book and drawing pens in hand. Weezer, Gargabe, Godsmack and of course No Doubt would be blasting from my CD player, which I had to keep still so that the cd’s wouldn’t skip. The other black and brown kids would call black and brown kids like me “rockers.”

“Why are you trying so hard?” An older Mexican man who sat next to me at the blue line asked me once.

“Excuse me?” I asked him taking off my 99 cent store bought headphones.

This was one of the few times in my life where I got called a fag in public. I remember after that incident, I began to tone down the color in my hair and the black nail polish.

“Dibujas bonito,” a young woman once told me as she was balancing her child in one lap and a grocery bag in the other. I wasn’t good at taking compliments so I just thanked her with a coy smile.

The current Hollywood and Vine Metro Red station looks very different from the way it did back in 2000. Much like the rest of Los Angeles, it has been sanitized so that it looks prettier for the tourists and newcomers aka gentrifiers. More fancy-looking stations and apartments have been added so that the once gritty Hollywood Blvd. that I knew resembles Times Square in New York, a place I’ve come to learn that actual New Yorkers love to hate.

I never did move to New York City to become the Mexican Andy Warhol but it was during those metro rides that I flexed my drawing muscles. I’d sketch and sketch all the way to Hollywood and back to Long Beach. Interestingly enough, I do get to visit New York City once in a while, ironically because of my art.

Make sure this account has posts available on instagram.com.